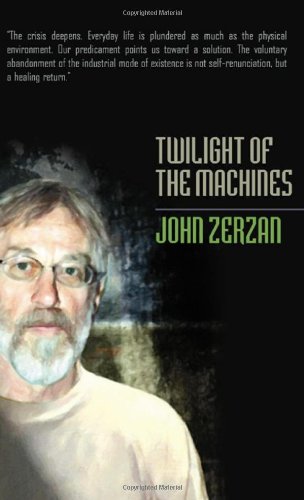 Zerzan's new set of essay's strike me as having some bug-bears aired, that argue in favour of the hypothesis that he has completely lost the plot. He rants obsessively about a small range of pet subjects, and appears, frankly, to be "not even wrong", he is so far off-beam.

One of his shibboleth's here is 'the post-modern'. I am actually unsure what he means by post-modern. I have read a reasonable amount of post-modernist material myself, and agree with critics such as Sobal, Bookchin, and theoretically Zerzan himself - it is a bankrupt and (so amoral it is in fact) immoral, creating a "nothing is true, so everything is permitted" ideology that is hugely destructive. I see the po-mo outlook as having positive application in the area of aesthetics - so, art, architecture, etc. - but absolutely no merit once applied outside that subjectivist field. That morality is problematic when applied as a Universal Imperative is no reason to race to an opposite extreme of relativism where all is permissible - a balance should be sought. Through modernism and the renaissance, ideologically, a balance may be achievable, though we may argue where the balance-point should be: but post-modernism has a different ideological conclusion, wherein all 'relative' points are equal, all 'truths' are equal. This absurdity is rightly railed against by Zerzan.

So, why do I have a problem with his approach? Because, his discourse relies upon post-modern interpretations of events, and post-modern rhetoric, throughout the book. In fact, this is most noticeable at the moments that he is most rabidly attacking po-mo nonsense. And, also, when he is adopting an interpretation of archaeology that suits his argument, and when he is arguing "against civilization".

His interpretation of archaeology appears to be, frankly, pseudo-religious. He attacks the "nasty brutish and short" (sic) brigade as being fad-ish, whilst himself entertaining another fad - that of "halcyon days in Elysium's Fields". This defence of the 'proof' that we were once lovely to each other, but then fell out of balance with the universe, is no more cogent than that we were once nasty shits, but then civilisation came along to give us the tools to transcend that. Both are more or less nonsense, and the arguments that Zerzan makes veer from po-mo rubbish to pseudo-religious rubbish. In fact, his position is one that is hard to disentangle from primitive bronze-age religious notions of a garden of Eden, from which we “fell”.

What is 'Civilisation'? What is 'Technology'?

Zerzan's attack on civilisation suffers from similar indeterminacy on exactly what he means by the term. But, when he does make clear statements, they verge on hysterical and ludicrous exaggerations that boil down to "it all went wrong when we invented language" and "it began to be destructive when women and men experienced a division of labour", as if we even were 'human before the former, and as if the latter cannot occur in a “state of nature”.

However, arguing that civilisation is rooted in language and the division of labour, is not 'etymologically true' (though, elsewhere, he does acknowledge the slightly more sophisticated interpretation, that civilisation arose from city culture, which arose once populations surplus to that needed to merely farm &/or hunt were supportable - and then attacks this 'agrarian revolution' as a prime cause of civilisation, too, consigning his optimal humans to a hand-to-mouth existence, art the mercy of the seasons, etc.). Nor is it true in any other important sense.

Suggesting that, without language and a division of labour, civilisation may have never arisen, is a fair point - but does it condemn language and the division of labour? You could equally trace the existence of Hitler back to “Adam and Eve” (if you believe in them - I don't of course, but they can stand in place of earlier evolved states of man), and thus decide that destroying “Adam and Eve” is appropriate as a method of saving ourselves from the very real problems our recent free-market industrial consumerist culture has created. This is absurd, and, as Bookchin would note, also anti-human. If you believe it you may as well drop the bomb tomorrow and be done with it.

Zerzan's later chapters vaguely hint at his solutions (more on this later) in a way that implies that, despite this evidence to the contrary, 1] he actually doesn't want to extinguish humanity completely, and that 2] he has a positive view of how we might save at least a few of us (a misguided one, though).

He also assaults technology as a prime problem with our culture. I am tired of rehearsing the same old arguments to separate technological advance through scientific discovery from capitalist and class-ist misappropriation of some technologies for bad ends, but Zerzan surely hasn't understood the difference. That the two are entangled is true, that ideas can have dynamics inherent in them, regardless of the intentions of (at least some) of those that use them is true, but acknowledging this is not the same as chucking the baby out with the bathwater. Yet Zerzan specialises doing just that.

Either / Or - The Excluded Middle

The logical problem that Zerzan faces is created by his binary either/or, +/- approach to logical exegesis. Essentially, there can be no middle, no compromise, no balance, no grey area in his philosophical approach - the middle is excluded. He is blind to it.

Yet it is only when analysing binary data that a binary conclusion is valid, such as a two-body science/math experiment. Introduce even one new element, and things get weird - the three-body problem emerges: this is a problem in any mathematical model, whether cosmological, economic or whathaveyou, and one that gets worse the more elements we introduce. His view of what science is is mired in pre-complexity ideology, and judged on those terms. It is ironic that his own discourse suffers from a similarly reductionist and binary logic as the idea he has of what science is. Reductionism as an inescapable adjunct of rationalism and science is an outdated idea. In philosophy and daily discourse it should also be seen and accepted as being outdated.

Zerzan is far from alone in being led by the nose of reductionism and the excluded middle in his own philosophical stumbling, but he is one of the more extreme examples of it.

Thus, for example, the ideas mentioned above, about first causes, about the roots of civilisation in language (something he uses himself rather a lot!), etc. all are mis-argued, as all are hunted down in an extremist either/or manner. Truth is by definition excluded from such debate. His placement of technology, of the written and spoken word, of alphabets, of gender divisions in a population, etc., are all reductionist in extremis, and frankly that makes him dangerous.

He begins to hint at ways forward toward the end of the anthology. Here, he mentions native american 'way-of-life' spiritualism.

He pines for the connectedness of locality, taking another religious precedent in his stride - that of John 1:12, "Having many things to write unto you, I would not write with paper and ink: but I trust to come unto you, and speak face to face, that our joy may be full" (he has no problem, evidently, with paper himself).

This attitude is made most apparent in the chapters on virtual reality and on-line community. Here, he sorely mis-apprehends the possibilities offered to many who have found that their 'real' neighbours have been turned into Stepford clones that display all the trappings both Zerzan and I would expect of mass society in a media-controlled, unempowered and over-populated world. Now, whilst the internet can also enhance these dehumanising effects, it also has the potential to create a global commons and indeed, qua McLuhan, a 'global village' that is defined by the people, in and through their affinity groups, rather than by capitalist globalisations global mass culture. The Rational Response Squad myspace sites illustrate the capacity of a virtual community to be more important, and in a positive way, than the members 'real' community is, genuinely saving lives and allowing members to find ways to survive in their 'real' 'community'.

A conflation of his anti-virtuality and pro-'way of life' embedded tribal localism indicates his 'way forward'. These are the only clues he offers, bar destruction of everything else, and so he inevitably will be judged in this review on the basis of them. I find it ironic that he has spent so much time railing against all of civilisation, including presumably the plough, the wheel, fire, medical knowledge..., and acknowledging that the civilisation we have at present is driving us to a crash (and a possible extinction) that he avowedly deplores - yet, at the same time he gestures at 'solutions' that would be viable only for the tiniest minority of those alive today. The survivalist subtext is worrying, and frankly renders his misapplication of blame in our societies problems all the more dangerous.

Taken in whole, this book is full of cant, anti-humanism, hypocrisy and foolishly blinkered attempts to philosophise about the nature of the problems we face today. This is a shame. It also is more than that - a danger. Anyone who takes him at face value and fails to analyse his arguments more deeply will be a potential danger not only to himself and his targets (many of whom we might not like much ourselves), but also to any attempt to change things. There is a saying that your enemy's enemy is your friend, but it is never clearer than in Zerzan's work that primitivism is one enemy of our mutual enemies who is absolutely no friend of ours.

There are many themes here I intend to expand upon elsewhere in the future, so I hope that the sketchy nature of some of my points can be forgiven. It will take a lot more than a review of this book to address the more pressing issues raised here.

In sum, I cannot recommend this book on any level. The compilation he edited a few years back, Against Civilisation, was a varied and interesting book (though I'd be lying if I said I'd go along with everything in it), and friends assure me that Zerzan has made other interesting and valid contributions of his own in the past. However, sadly, this is not one of them.